In March 1851, William & Susan (Tyrie) Saunders eldest son, William Tyrie Saunders, who had either emigrated with his parents in 1850 and then returned or had remained in London, was a 20 year old Apprentice Engraver on Wood lodging at 24, Little Queen Street, London, the home of Catherine CREWS, a Master Bookbinder, and widow of Philip CREWS, a Master Shoemaker.

There is a reference to a Philip Crews marrying Cathe Best at St. Giles-in-the-Fields during 1823. Every possibility that these are the same as above but no confirmation as yet.

Catherine had three unmarried daughters living with her at the same time, Susannah; Catherine and Elizabeth Mary.

Philip CREWS, who had been a Master Shoemaker with premises at 31 Castle Street, Covent Garden, London (now Shelton Street just north of and parallel to Long Acre), from about 1836 to 1843 when the family moved to 24, Little Queen Street, died on the 21st December 1847, aged 59. It is possible that he is the same Philip CRUISE, son of Thomas & Mary CRUISE, baptized on the 1st March 1789 at Withycombe Raleigh, South Devon, but this has not been confirmed.

Seven months later, on the 1st November 1851, William Tyrie and Elizabeth Mary CREWS were married at the parish church of St. Giles-in-the-Fields, London. The witnesses shown on the Marriage Certificate were Will Henry and Susanna CREWS.

Also living at 24, Little Queen Street in 1851 was Catherine’s eldest daughter, Eleanor, a Bookfolder, who had married William Henry Hersey, a Coachman, at St. George’s, Bloomsbury on the 14th April 1844.

Philip CREWS's widow, Catherine, died on the 6th November,1857 at 24 Little Queen Street. No Information on her burial. (See brief details of her will at foot of this page.)

Philip and Catherine's other two daughters were;-

Susannah CREWS - born on the 18th March 1827. She was a Bookbinder by profession and never married. She died at her home, 4 Gate Street, Lincoln's Inn on the 27th March 1899. 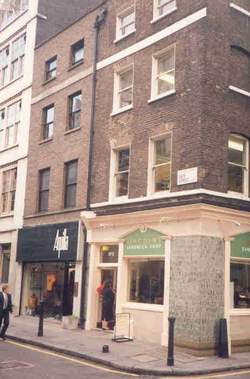 Catherine CREWS - born on the 14th April 1829. In the 1861 Census she is shown as a Bookfolder lodging at 46 Duke Street, St. Giles, London. Ten years later she was lodging at 12 Dean Street, Holborn. No further information.

(Please see respective pages for further details on the above)

According to Carmen Sawyer (nee Saunders) her grandparents, William Tyrie and Elizabeth Saunders, went over to the States in about 1858/9 but did not like it and arrived back in London in 1860 a few days before her father, Herbert Frank Saunders, was born on the 5th March in 24, Little Queen Street. No confirmation of this story has yet been found.

In the meantime William Tyrie carried on in his profession as a skilled Engraver on Wood from various addresses including 24, Little Queen Street; 13, Great Turnstile and 69a, Great Queen Street, London.

A copy of his advertising handbill, beautifully illuminated, still survives and shows;

William died of Peritonitis on Monday, the 15th March 1886, aged 55, at 69a Great Queen Street. No record of where he is buried has yet been found.

Elizabeth Mary died on Wednesday, 3rd May 1905, aged 71, at 3 Alwyne Place, Islington, London, the home of her daughter, Elizabeth Catherine (“Lizzie”). No record of where she is buried has yet been found.

In her will dated 23rd June 1857 Catherine Crews left to her daughters Eleanor Hersey and Catherine "my cabs and horses together with the harness and effects thereto belonging equally divided between them my daughter Eleanor to have first choice and selection in making such division"
To her other two daughters, Susannah and Elizabeth Mary (Saunders) she left "the good will of my business of a bookbinder now carried on by me with the presses and other effects belonging thereto"

In the 1861 Census Eleanor Hersey was shown as a 'Visitor' at 32 Montague Mews, Bloomsbury, the home of Benjamin & Elizabeth Smith (Benjamin was a Cab Proprietor). No later information on Eleanor or her husband has yet been found.

My thanks to John Hersey for this additional information