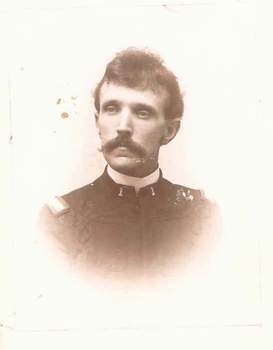 Herbert Frank Saunders
1860 - 1935
Herbert Frank Saunders, the fourth child of William and Elizabeth (Crews) Saunders , was born on the 5th March 1860 at 24, Little Queen Street. This was the home of Elizabeth Mary’s sister, Susannah Crews, since the death of her mother, Catherine Crews, on the 9th November 1857. It would appear that Susannah, who never married and a Bookbinder by profession, was the “Matriarch” of the Saunders and Crews families and oversaw their general 'well being'. My Grandfather obviously held her in awe and referred to her as “Miss Crews” and not “Aunt”.

In about 1884/5, Herbert Frank went to America. At first he stayed with his relations in Rochester, N.Y. until he was admitted to the Tulane School of Medicine, Tulane University, New Orleans, Louisiana. He graduated from there in 1896. He was then an intern at the Charity Hospital, New Orleans followed by a year as resident at St. Joseph’s Hospital, Houston, Texas. Subsequently he returned to Tulane for his speciality, surgery.

After this he joined the U.S.Medical Corps as an assistant surgeon serving in the Philippines and China during the Boxer Rebellion. He then resigned and took a position as surgeon for Mexico Railroads. From there he went on to an English Company, Mazipil Copper Ltd.,

He loved Mexico and planned to make it his home. His friend, Jose Maria Vasquez, a mining engineer, introduced him to his daughter, Luisa Vasquez. Her father was Spanish and her mother French. They became engaged and married on the 6th November 1906. 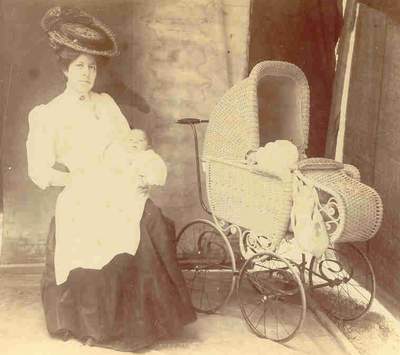 Luisa Saunders
1883 - 1937
Then, in 1914, with the Revolution in full swing, they had to leave Mexico. Heartbroken, they sailed for New Orleans, Louisiana, and then on to Galveston, Texas where they planned to wait out the revolt.

But, in the event, they lost everything and it was hard for a doctor to start up a practice in Texas. However, a doctor on the mainland decided to move so Herbert was able to take over his practice. Herbert & Luisa were never happy living in America.

Herbert eventually died in Galveston on the 14th June 1935 and his wife, Luisa,on the 29th November 1937. Both were buried in the Galveston Memorial Park.

1. Their eldest, Louis Herbert Saunders , was born on the 28th July 1907 in San Pedro de Ocampo, Zacatecas, Mexico. He married Blanche Adams who was born on the 25th February 1915. Blanche died in May 1990 and Louis died the 9th November 1998, aged 91, in a nursing home in Hurst in the outskirts of Fort Worth, Texas. They had no children.

2. Their second child was Thomas Milton Saunders born on the 9th November 1909 in San Pedro, but died a year later.

3. Their first daughter, Margarita Inez, "Rita" Saunders, was born on the 28th October 1910 also in San Pedro. She married J. Shepherd Robberson, an army officer and an architect by profession, and lived in San Angelo, Texas.

4. Their second daughter, Carmen Susanne Saunders, was born in San Pedro, Zacatecas, Mexico on the 20th February 1913. With her parents, two brothers and sister she left Mexico a year later to escape the Revolution. They settled down in Galveston, Texas. On the 21st January 1938 she married Benjamin Franklin Sawyer (named after two grandparents - one Benjamin and the other Franklin) in San Angelo, Texas. He was in the army, latterly as a Major, for nearly 21 years.

5. The fifth and last of Herbert & Luisa’s children was John Francis (“Jack”)Saunders born in Arcadia, Galveston County, Texas on the 7th March 1921. He was a graduate of the University of Texas; had been an Air Corps pilot during the war serving in the Far East, and subsequently worked for the Shell Chemical Company. He married his college sweetheart, Lillie Marie Daniel, who became a teacher and taught in Houston, Texas for over thirty years.

Jack and Lillie had three children -