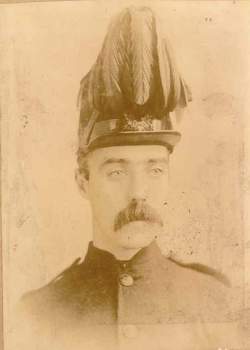 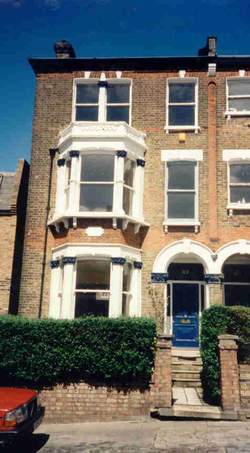 101, Chetwynd Road, St. Pancras.
Little is known about John only that he was also an Engraver on Wood living latterly at 101 Chetwynd Road, St. Pancras, London with his wife, Clara Ann. He does appear in the 1881 Census as a 26 year old “Artist and Engraver” lodging at 3, Endell Street, Covent Garden. At the same address is another lodger, Clara Glaisher, a 40-year-old Bookbinder. Was she to be John’s future wife?

In fact he married another Clara - Clara Ann Down - in St. Anne’s Church, Highgate on the 22 July 1882. Clara had been born at No. 6 Mabledon Place, St. Pancras on the 7th March 1857, the daughter of James Down, a tailor and draper, and his wife, Eliza Judge. By coincidence the Saunders family were living at No. 2, Mabledon Place in the late 1860’s to early 1870’s. 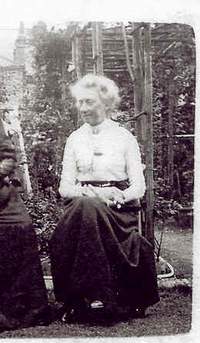 The 1891 Census shows that their first home was at 26 Oakford Road, St. Pancras. At this time John was shown as being self employed.   They had a lodger, 16 year old Raymond Milford born in Wickham, Kent, who was also an engraver on wood - most probably an apprentice.

According to the 1892 Post Office Commercial Directory of London, John was shown as an ‘Engraver on Wood’ and working at 1, Norfolk Street, Strand. The 1891 Census shows this address as being offices although a family of five named Hockland were actually living in the premises. Subsequent directories confirm that he was working at the same address until about 1899 when it seems that No. 1, Norfolk Street was demolished and redeveloped. His name disappears from the directories after this date. It is interesting to note that in 1896 there were two artists and four engravers on wood working independently in the building.

In his eldest brother’s family bible there is a note to indicate that at one period John was most probably working at Room 23, Benson’s Chambers, 62, Ludgate Hill, London but there is no mention of a date.

In 1900 a firm of Lithographers - L. Van Leer and Co - were working in Benson’s Chambers and did so until 1919 when they appeared to go out of business. It is possible that John was employed by the firm and is it just a coincidence that they appeared to cease trading when he was about retirement age.

“I trust you are keeping in good health and that your husband is fully recovered and fit again, also hope that he will not have to go away any more. Aunt Nelly [Eleanor Saunders] is certainly a wonder at her age doing what she is but I think the old folks everywhere are grand for Aunt Clara [Clara Ann Saunders], who is in her 88th year still gets about like a woman of 60 in spite of the fact that she has been bombed out once in 1941 and has had flying bombs quite close recently.”

As far as is known they had no children.