Levi and Maria had three other children;-

Levi H. Parish, a farmer, was born in November 1844 in Greece, Monroe County, N.Y. He married Alice SAUNDERS, the youngest daughter of William and Susan (Tyrie) Saunders, born on the 30th April 1848 in 5 Dean Street, Holborn, London, about 1868 most probably in Rochester, Monroe County.

They had two daughters:-

PARRISH - At his late residence, in West Greece, Friday, May 30, 1902, Levi H. PARRISH, aged 57 years.
-Funeral this (Sunday) afternoon from the house, West Greece, at 3:30 o'clock. Interment at Greece cemetery.

They had two children:-

In the 1930 Rochester City Directory Mortimer and Elizabeth are shown living at 30 Aldine Street.
Mortimer is now a Commercial Traveller and Vice President of H.P.Brewster Co. of 43, South Water Street.

The marriage of Miss Ethel M. Linscott, daughter of Mr. and Mrs. Mortimer H. Linscott, to Frank Ray Montgomery, son of Mr. and Mrs. Gordon S. Montgomery, took place on Saturday afternoon at the home of the bride's parents on Aldine Street. The ceremony was performed by the Rev. William R. Taylor, pastor of Brick Presbyterian Church.

The bride and bridegroom left for an automobile trip through the Berkshires, the destination being Boston and York Beach. After August 1 they will be a home at 112 Gillett Street.

The prenuptial events included a dinner at the Hotel Rochester followed by a theater party, given by Mr. and Mrs. A. E. Huther; a tea by Miss Antoinette Van Liew at her home on Seneca parkway and a luncheon at the Century Club by Miss Margery Lyddon.

Mortimer died in Manchester, New Hampshire on about the 27th August 1942. No newspaper obituary has been found. Lizzie died on the 19th July 1949 as reported in the Democrat & Chronicle;

Both are buried in Falls Road Cemetery, Greece.

Cora died on the 29th April 1922 as shown in a notice in the Democrat & Chronicle.

Services at the home in Greece on the Ridge road Tuesday afternoon, May 2, 1922 at 3 o'clock. Rev. Fred E. Dean and Rev. A.M. Hendrick officiating. Interment at Falls cemetery on the Ridge road.

Charles subsequently remarried possibly in 1924. His second wife was Angelyn Noades.
From at least 1930 until their deaths, they lived at 2588 Ridge Road W.
Charles Cole is listed as a janitor for Greece Central Schools. However, in 1930 he is listed as a farmer.
Charles died on the 15th May 1960. The following notice was in a local paper.

They were both buried in Falls Road Cemetery, Greece.

It would appear that there were no children from either marriage.

Various markers of members of the Parrish family all buried in Falls Road Cemetery, Greece. 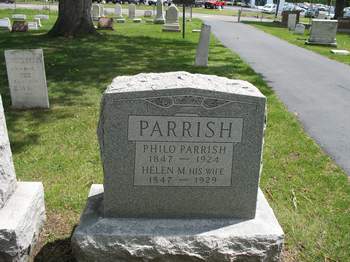