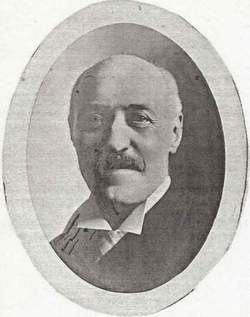 He was born on the 11th March 1853 at 24, Little Queen Street (now the northern end of Kingsway which joins High Holborn in the north and Aldwych in the south). For some unknown reason his birth was registered as Philip William.

In 1880 he emigrated to America. He sailed on the s.s. ‘Abyssinia’ from Liverpool on about the 18th March 1880 for New York. Whilst on the ship he wrote home to his mother giving graphic details of his voyage.

He met and married Grace RUHLIMAN. They had one son, Charles Francis Saunders, who was born about 1883, most probably in Pawtucket, Rhode Island.

Grace unfortunately died fairly soon after her son was born and Charles was said to have been put into the care of a couple in Fall River, Massachusetts, to bring him up while his father practised his profession as an Engraver on Wood wherever he could find work.

William Philip was certainly working as an Engraver at 73 East Main in Rochester, N.Y. and lodging at 52 South St. Paul in about 1886. In 1888/9 he appears to have been in partnership with Edward C. Cooling trading as ‘Cooling & Saunders’ - wood engravers - working in 26 Tallman Block. At this time he was living in the family home at 20 Martin Street until 1890 when he was shown as having moved to Akron, (?Ohio).

He never remarried and spent the final years of his life with his only son, Charles, and wife, Mary, in Albany, N.Y. 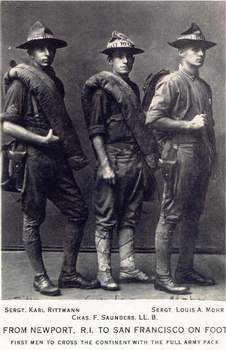 On their way they sold some 10, 000 photographs of themselves; gave lectures and even appeared in vaudeville sketches in movie houses billing themselves as “The Three Wise Men of the East” to help finance their tremendous effort. Charles even earned their keep for a night cutting the hair of a hotel proprietor who was out on bail having been charged with murdering is wife! The trip, which was completed in April 1914, took ten months in all passing through sixteen States and covering some 4,400 miles.

They delivered a letter from the Governor of Rhode Island to the Governor of each state they passed through. They were reputed to be the first people to walk from the East to West Coast of the United States carrying a full 60 lb. army pack.

Over 50 years later, in 1965, Charles wrote about their exploits from a diary he had kept. It started off as follows;

"Six Feet from Coast to Coast"

Three men - two army officers, one lawyer, all young and all demented, in regimentals and the full field equipment of the regular service in the field, for hike beginning at Newport, Rhode Island to San Francisco, thousands of miles, with only the good Lord to protect against calamity.

And now, from the diary;

A bright morning in June 1913. The lumbering ferry from the Battery at the metropolis had chugged through the deep waters of the Sound to St.George, Staten Island, and landed us on the beach. We performed a solemn ceremony of handshakes and wished each other ‘Good Luck’ and, with a last parting look at the Statue of Liberty and salute (which fond gesture the Lady failed to respond,) we turned faces west into the unknown beyond. Across the island to Perth Amboy; boarded the ferry to Trenton (since the contract held no provision for swimming); and struck tent in a pasture. Wakened by a delegation of geese; a tumultuous cackling, honking and circling around, seeming to revolt the intrusion in their domain and, fearful of a frontal attack, we;

‘Folded our tents, like the Arabs, and silently stole away’

When Charles arrived back in Albany the following report appeared in The Albany Journal, Saturday, June 6, 1914;-

SAUNDERS BACK FROM LONG HIKE

Was Accompanied by Two Army Sergeants

Charles F. Saunders, the Albany lawyer who on July 22 started on a hike across the country with two soldiers, arrived back in Albany to-day. He said he had a wonderful experience, but was glad to get back to work. It took him just 10 months to cross from New York and the arrival at the Pacific ocean, near San Francisco, on May 22. He remained in San Francisco only three days when he started back by train for Albany, stopping for short visits to Chicago and Rochester, His two companions were Sergeant Louis Mohr, formerly of the regular army, and Sergeant Carl Rittman, of the National Guard of Providence, R.I.. They remained on the Pacific coast. Mohr obtained a position with the Pan-Pacific exposition commission in San Francisco and Rittman secured a position in Venicve, Cal. as an artist with an advertising house. Rittman is a clever sketch artist. The three young men made their way across the country by giving vaudeville entertainments in the various towns and villages through which they passed. Rittman entertained, with quick chalk sketches, Saunders gave talks on the experience of their hike, and Mohr gave demonstrations of the latest-regular army manual of arms. All three were dressed in the khaki uniform of the regular army.
EARNED OVER $1,000.
"Through these entertainments," said Mr. Saunders, "we made over $1,000, which just paid our expenses, which amounted to $1 a day apiece. We had to pay no railroad fares and we carried our own grub. When we were in cities we would buy our meals in restaurants and when tramping across the desert in Arisona and New Mexico we prepared our own food wherever we happened to camp for the night. ( Next few words unreadable) ..was on reaching the Mexican border. They wanted to cross to Juarez but the border guards of the regular army refused to allow them to do so until they had donned citizen's clothing.
CITY OF OUTLAWS
"Juarez" said Saunders "is a city of outlaws. Gambling, cock fighting and everything of that sort goes without restraint. It is in the hands of (unreadable) and is absolutely controlled by Villa's brothers. A lot of American touts hang out there and prey upon American tourists by acting as guides. They take the tourists through the gambling houses and finally persuade them to put money on the Mexican lottery. Invariably the tourists lose. We got stung ourselves, for a good piece of change and made a complaint to the American consul, as a result of which 15 of these alleged guides were put in jail and later sent across the border"
It was along the border that the three hikers gave many of their entertainments at the regular army posts and they were always hospitably received by the soldiers. Mr. Saunders said that by walking he was able to get an idea of the country such as could not be gained in any other way. The most unusual experience he had was walking the 1200 miles of desert through New Mexico, Arizona and Southern California.

Years later Charles gave talks at local Albany functions describing their adventure and the interesting people that they had met on their way.

After living in Albany the family moved to New Scotland Road, Slingerlands, near Albany, New York. One of the sons, William, known as Bill, was said to have theatre in his blood. When they were children he would put on puppet shows in a little theatre he built in the barn. Children would be lined up to get in and his show even merited a write up in the local paper.