Walter Crews Saunders, the youngest child of William and Elizabeth (Crews) Saunders, was born on the 3rd November 1869 at 2 Mapledon Place, St. Pancras, London. He was a Lithographic Artist and married Sarah HALE in St. Clement's Church, Fulham, London on the 8th July 1894.

Sarah Hale was born in Urchfont, near Devizes, Wiltshire on the 19th September 1872 and was the youngest of nine children of James and Sarah (Miles) Hale. The HALE and MILES families had been in Urchfont for many generations and were mainly Agricultural Labourers.

There is no record as to when Sarah arrived in London but in the 1891 Census she is working as a cook in 77 Brompton Road which was a 'Linen Drapers' shop. There was a manager, seven assistants, a porter and Sarah, the 18 year old cook. Presumably they must have all lived over the shop. In 2008, 77 Brompton Road is a 'Russell & Bromley' shoe shop 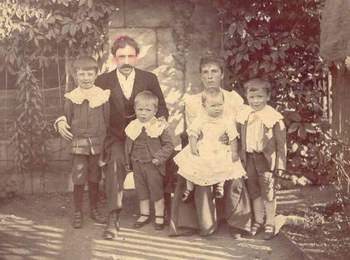 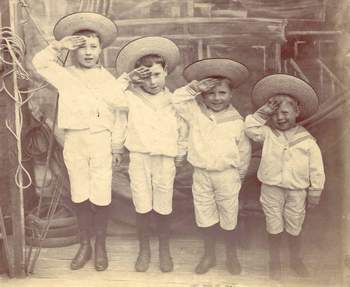 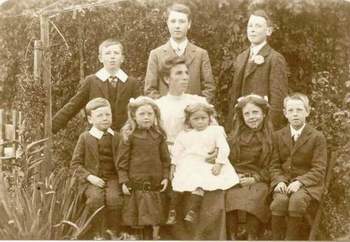 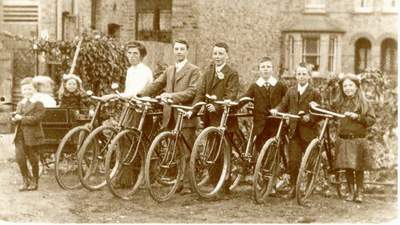 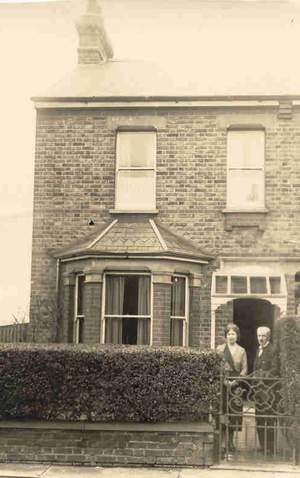 Brent Villa, 73, Otterfield Road, Yiewsley, West Drayton
with Gwen and Father at front gate C1930
...................
1. Walter Augustus was born on Friday, the 27th September 1895 in Smyrna Cottage, Clifton Street, St. Albans, Hertfordshire. He worked for a firm of ironmongers, J.W.Carpenter, before joining the army at the beginning of the 1914-18 war. He was serving with the 3rd London Regiment, Royal Fusiliers when he was killed by a shell blast in the Ypres Salient on the 29th August 1915 about a month before his 20th birthday and was unmarried. He was buried in the No.1 Military Cemetery, Laventie, Pas de Calais, France.
Walter's Grave in No.1, Military Cemetery,
Lavantie, Pas de Calais, France

Note:
I visited the cemetery on the 15th February 2001 in brilliant sunshine. We turned into the muddy farmyard with rusting agricultural machinery lying on both sides and the cemetery was immediately behind the farm buildings. It is split into two sections with a cobbled roadway in between. The left hand smaller section is mostly Indian servicemen with the British in the larger right hand section. The grass was immaculate and weed free. Some of the gravestones, including Walter's, are now a little difficult to read as the engravings are wearing with the passage of time. The cemetery is surrounded on three sides by arable land - hop poles on the west and ploughed land to the north and east. There are approximately 600 servicemen buried there. Very peaceful. 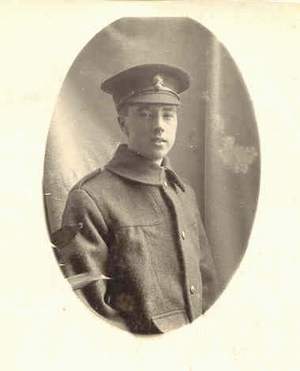 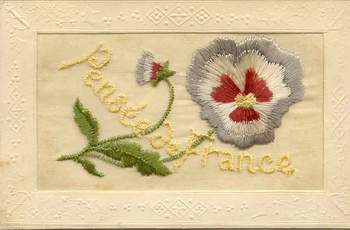 A French embroidered card sent by Walter to his sister, Gwen, C1915
2. Percival (“Percy”), born on Saturday, the 21st May 1898 at the same address in St. Albans. After service in the army (3rd Bn, London Regiment, Royal Fusiliers) during the 1914-18 war, in which he was wounded, he worked for most of his life with British Railways. He married Nellie May Ford on the 9th August 1921 in Sherborne, Dorset. They had two sons, Norman Percival, born on the 19th September 1926 and Peter John, born on the 20th April 1931. 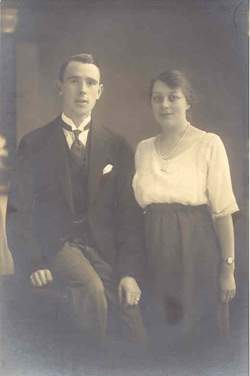 Percy & Nellie Saunders' Wedding
Sherborne, Dorset, 9th August 1921
3. Kenneth, born on Wednesday, the 16th August 1899 in the family home in St. Albans. Most of his working life was spent with the ironmongers, J.W.Carpenter.
He married Margaret Mitchell in Glasgow on the 18th June 1934. They had one son, Kenneth James, born on the 21st October 1936. 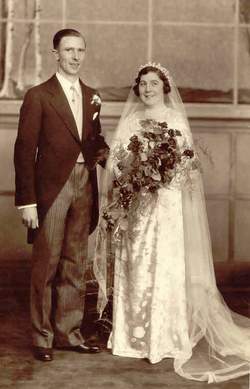 Stanley Alban, born on Sunday, the 30th June 1901 in the same house in St. Albans. He had a variety of jobs during his life after an engineering apprenticeship with J.H. Smith, Dawley Road, Hayes, Middlesex. He joined the firm when he was 17 and was there until about August 1922. In about 1923 he became a chauffeur to Miss Henrietta Louisa Hay. He actually took over from his father-in-law to be, Alexander Auld. This lasted up to the outbreak of the war in September 1939. He then worked in a factory in Paisley for several months; joined the Royal Air Force on the 16th April 1940 and then, after training at Morecambe, was posted to a balloon barrage site in Mount Vernon, Glasgow and subsequently Scapa Flow in the Orkney Islands. 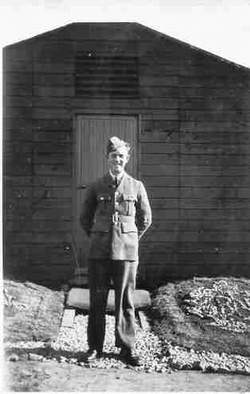 ...................
Remustered to Radar where he was a mechanic helping in the running and maintaining of generators supplying power for Radar operations firstly at RAF Upper Heyford and then for about two years at RAF Whalsey, one of the Shetland Islands until the end of the European war in 1945. Because of his age (44) he was demobilised early - 28th August 1945 - and spent several months with the Norwegian “U.M.A.” Shipping Delegation in London prior to their disbanding. From January 1946 until mid 1949 he and my mother ran a Guest House and Café called ‘The Bakery’ in Tatsfield in the North Downs some 20 miles south of London. After their return to London in 1950 they lived at 28 Jay Mews, Queens Gate and Stanley took over and ran a small Dry Cleaning business off Euston Road - about 300 yards from where his father had been born. He married Edith Catherine Auld at All Saints Church, Ennismore Gardens, London on the 23rd February 1929. They had one son, Stuart John, born on the 10th October 1930. 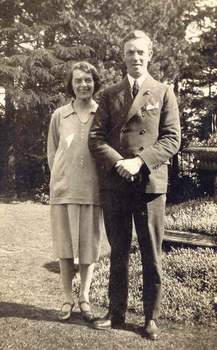 Edith and Stanley Saunders about 1929

Gwendoline (‘Gwen’) May, born on Sunday, the 21st May 1903 and the last of the family to be born in St. Albans. She married David William Parsons at St. Matthew’s Church, Yiewsley, Middlesex on the 26th September 1931. They lived for many years in Parkestone, Dorset. They had no children. 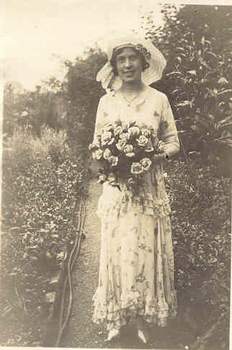 Gwen Saunders Wedding Day
Yiewsley, 26th September 1931
6. Leslie Julian, born on Tuesday the 26th December 1905, was the first of the children to be born in Yiewsley, Middlesex. He spent most of his life in the Ironmongery trade mainly in Worcester, only interrupted by service in the Royal Air Force during the 1939-45 war. He married Irene Hubble on the 20th July 1935 at the Parish Church, High Wycombe, Buckinghamshire. They had two children, Helen Margaret, born on the 27th May 1938 and Richard Julian on the 29th August 1943. 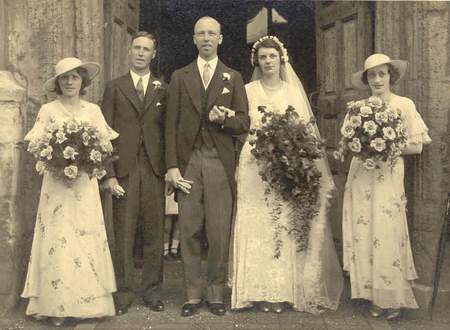 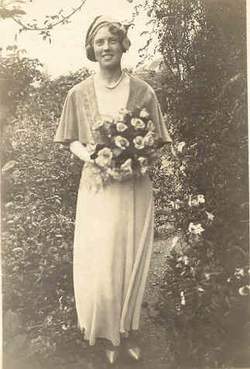 Phyllis Saunders
Bridesmaid at her sister's wedding 1931
8. Dorothy (‘Dorie’) Winifred, born on Friday, the 24th September 1909 in Yiewsley. She married Francis (“Frank”)Cowley on the 4th July 1936 at St.Matthew’s Church, Yiewsley. They had one son, Roger, born on the 17th February 1939. 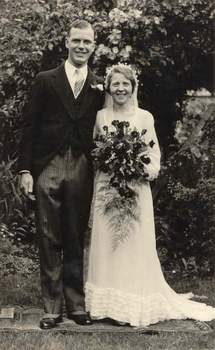 Frank and Dorie's Wedding
Yiewsley, 4th July 1936
9. Bernard Crews, born on Thursday the 30th October 1913 in Yiewsley. He worked as accountant at Pinewood Studios for many years and latterly at the National Theatre on the South Bank, London. He also served in the Army during the 1939-45 war. He married Ivy Rosina Mills on the 5th December 1941 at Uxbridge Registry Office. They had one daughter, Annette Heather, born on the 31st December, 1946.

Bernard Crews Saunders
10. Leonard, born on Saturday, the 19th August 1916 in Yiewsley. He worked in the motorcar trade and then with his brother, Leslie, and also his bride-to-be in a hardware shop in Henley-on-Thames until he was called up into the Royal Navy in 1940. He married Joan Lesley Ward in Henley-on-Thames on the 4th April 1942. He was killed on the 8th November 1942 while serving as a Signalman on H.M.S. Walney in Oran Harbour at the start of the Operation "Torch" landings in North Africa. 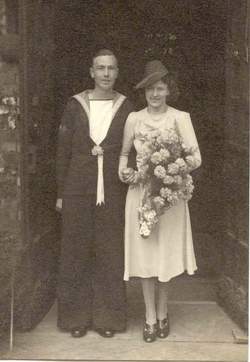 
For more details about any of those shown on this page please contact Webmaster.
HOME
Return to top of page