William Saunders, a carpenter and the youngest child of John and Elizabeth (Warne) Saunders, born on Friday, the 22nd February 1805 in St. Breock, Wadebridge, Cornwall, married Susan TYRIE on Sunday, 4th October 1829 at St.Stephen's Church, Coleman Street, off Moorgate in the City of London. The Register shows that they were both ‘Of This Parish’. They both signed the register. One of the two witnesses was Andrew TYRIE, most probably her father, and the other was a Mary Turner (relationship - if any - unknown).
This church was destroyed during the bombing of London in December 1940. Susan, born on Friday, the 31st July 1812, most probably in the Finsbury area of London, was the daughter of Andrew and Susanna TYRIE.

It is not known if Susan was an only child but no siblings have been traced to date.

According to the Register of St. Botolph's Church, Bishopsgate, London, an Andrew TYRIE and a Susan (Susanna) STEEL were married there on the 1st May 1805.

William and Susan (Tyrie) Saunders had nine children in all, seven being born in London and the other two after they had emigrated to the U.S.A. in 1850.

William applied for U.S. Citizenship on the 25th July 1854. On his 'Declaration of Intention' he stated that he had arrived in America on the 15th June 1850 but there was no mention of a ship or the port of entry. He eventually officially became an American citizen by a Naturalization Certificate issued by the Monroe County Court on the 10th August 1856. According to "The Rochester City Directories" of 1851/2 William and John had a carpentry business at 'Rear 17 Buffalo'. The Directories of 1853/4; 1855/6 and 1857/8, show that they had been joined by Charles and working in Exchange Place, Rochester.

However, in the 1860 Census, William, Susan, Frank, Herbert, Alice, Phillip and Oliver were living in Parma on the western outskirts of Rochester and William was shown as a 'Farmer' and his son Frank as a 'Farm Labourer'. There is no explanation for this move to Parma.

By the 1863/4 William is back to carpentry in the Exchange Place area of Rochester and living in 82, Smith's Arcade, but no mention of the rest of his family until 1868 and then the 1870 Census when they were all living at 9, Martin Street, Rochester.

The Saunders fortunes appear to have grown with this general prosperity as in the 1866/67 edition of the "Rochester City Directory" there is the following eighth page advertisement; - 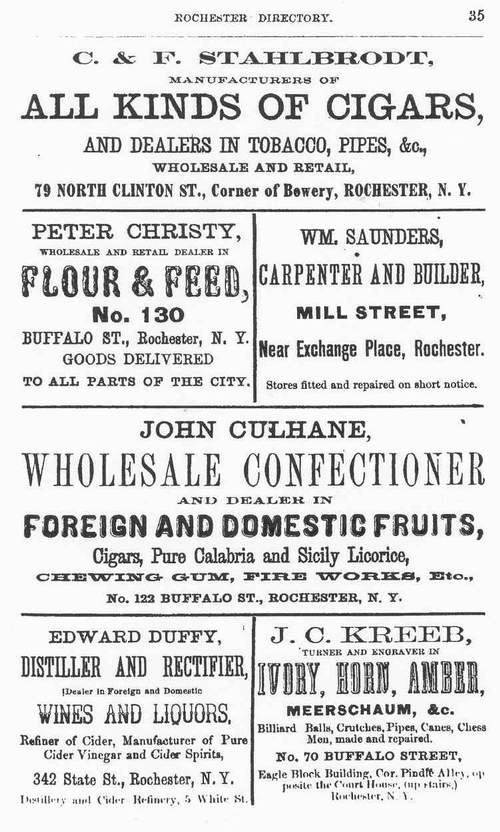 Charles Saunders was a carpenter like his father. When the family emigrated to the U.S.A. in 1850 he worked in a building/carpentry business that they started in Rochester, N.Y.

Little is known about him until his unfortunate death which was reported in the local paper. It would appear that he never married.

Charles Saunders, 72 years of age, a carpenter by occupation, who for some time occupied Room 61 on the top floor of Smith’s Arcade at the Four Corners as a living room, was found dead in his room this afternoon by James Rock, a tailor, who has a shop on the same floor of the building.

Saunders’ death to all appearances was the result of natural causes, as there were no marks of violence on the body. Saunders was last seen alive about 4 o’clock yesterday afternoon when he was seen in the building on the way to his room by Thomas Bell, the janitor.

Saunders, not being seen about the building today, Mr. Rock entered the room, the door of which was unlocked, and found the old man dead on the small cot on which he was accustomed to sleep. The room was in a very untidy condition and there was no fire in the small cook stove in the room. Saunders has a brother and several sisters living in the city. Coroner Kleindienst was summoned and had the body removed to the morgue.

Elizabeth Saunders was another one of the Saunders children who never married. Again little is known of her early years except that she lived at home with her parents. In later life she was living with her brother, Herbert, and wife, Mary, at 371, Troup Street, Rochester, N.Y. until she died in tragic circumstances. The events are detailed in the following newspaper reports;-

Four cases of either sudden or violent deaths claimed the attention of Coroners Kleindienst and Killip yesterday. John Fahy, a farm laborer in the village of Webster, was found lying on the floor of a stable where he had gone but a few minutes before to finish the chores; Mrs. Francesca Colonna, an Italian woman, whose home is in Albion, died at the City Hospital from the effects of a shooting accident Saturday; Frank Wood, the 8-month-old infant of Daniel Wood of No. 21 Kleuh place, died of cholera infantum, without a physician being present; and Mrs. Elizabeth Saunders, of No. 371 Troup street, hanged herself to the rafters of the garret in the home of her son, Herbert Saunders, with whom she had made her home.

Mrs. Saunders was left alone in the home during Saturday night while the rest of the family went on a visit to remain over the fourth. She was 56 years of age, and it is supposed that the heat and noise of the day unbalanced her mind. Her home was a happy one and there was no known reason, other than the one mentioned, for the deed.

Some time during the night she procured a rope in the house and made her way to the garret. Fastening the rope to a rafter, she made a noose of it and slowly strangled herself to death. The family got home at ? o'clock yesterday morning. A glance into the bedroom showed that Mrs. Saunders had not occupied it during the night, and a search of the house was made. On opening the door leading into the attic the searchers were horrified to find the corpse swinging from the rafters. It was hastily cut down and a physician in the neighborhood summoned, but he could do nothing. Coroner Kleindienst was notified of the suicide and went to the house. He has not decided when to hold an inquest.

There were several errors in this report as she was unmarried and certainly not the mother of Herbert Saunders but, of course, his sister. She was 60 years of age and not 56 as reported. Unfortunately, inquests were more informal affairs at that time and there were no records kept of the findings.

The same newspaper had the following report the next day.

Oliver Walter Saunders , the youngest of the family and the only one born in Rochester, eventually entered the family building and carpentry business in Rochester. He, too, died in tragic circumstances aged only 28.

When Charles Saunders, the proprietor of the carpenter shop on Scott Place, near the corner of Allen Street, opened his place yesterday morning, he was horrified to see the dead body of his brother, Oliver W. Saunders, hanging in the air with a rope about his neck, the other end of which was tied to one of the rafters running across the upper part of the building. He immediately cut the body down and ran at once to the residence of Dr. Proctor, on Sophia Street and notified that physician of the occurrence. The doctor hurried to the carpenter shop but found that medical assistance was of no avail.
Coroner Farley was then notified and upon his arrival the body was taken to Jeffrey's undertaking rooms on State Street. Dr. Proctor stated that in his judgment the unfortunate man must have committed the deed sometime during the night, as the body was cold when he arrived and gave every indication that life had been extinct for from eight to ten hours. The rope used was an ordinary clothesline, which Saunders had thrown across one of the rafters of the building. After placing two empty nail kegs under the rope and adjusting the noose, it is thought that he either jumped from the kegs or kicked them from under him. Saunders was about 28 years of age, unmarried, and resided with his two brothers, Charles and Herbert, at No. 9 Martin Street. His habits were temperate, but of late he had acted strangely and it is believed that his mind was affected.

He was buried in the family plot in Mount Hope Cemetery on the 14th April. He was not married.

A short announcement in the “ Rochester Union and Advertiser” of the 9th January 1878 stated;

On the 27th March 1882, William’s widow, Susan, aged 70, died at the same address of "Rheumatism Inflammatory". 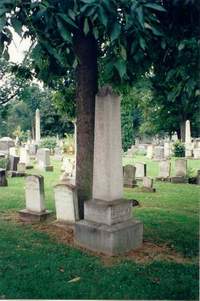